Sparking a national conversation on Social Media about budgetary inequality by transforming a dedicated research into a digital marketing strategy.

A social digital marketing campaign to create awareness and change attitudes regarding budgetary inequality between Jewish and Arab society in Israel.

Givat Haviva and FES Israel have initiated a campaign on budgetary inequality between Arab society and Jewish society as part of a wide-ranging activity to promote social justice in Israel.

As part of the campaign, aChord Center for social psychology at the Hebrew University conducted a preliminary study on the effectiveness of various message delivery techniques, the conclusions of which were later applied in the creation of the campaign videos and messaging.

All this to improve the effectiveness of the digital marketing activities, maximize user’s engagement and create a dialogue around the topic on social networks.

The preliminary study for the campaign

aChord Center at the Hebrew University wanted to examine which messaging methods or psychological mechanisms are more effective in different groups that differ in their attitude to social inequality.

The theoretical model on which the study is based is related to a person’s perception of social identity in relation to other groups in the population.

The model argues that when “favored” groups in the population are presented with some inequality, in our case the issue of budgetary inequality, they are faced with two main threats to their “social identity”:

The target audiences in the study were divided into 4 groups according to the type of protection against these threats (when presented with the issue of budgetary inequality):

During the campaign, two types of videos were created based on different psychological techniques.

1. Self-Affirmation and “Foot in the Door”

3 videos made separately for men, women, and young people (Instagram).

Self-affirmation theory emphasizes the motivation of the individual to maintain a positive self-image during a situation of threat to his or her self-image.

The threat to self-esteem in the videos is reflected in the exposure to the issue of budgetary inequality.

“Foot in the Door” Technique

A technique that aims to persuade people to perform a certain action through a request to perform a “smaller” and more negligible action earlier.

In our case, the request from the users to recall a significant post they uploaded on social media.

The social belonging theory claims that there is a basic human need for belonging to a particular group. Social belonging serves as an excellent motivator for action when each of the research groups was typographically presented in the video.

In our case, it is about the need to belong to the “right” group in response to the threat to social identity and act accordingly – share the post and respond.

The study was in a “before and after” format in which people’s attitudes were examined regarding budgetary inequality between Jews and Arabs, classified into the mentioned groups, before and after seeing a particular type of video through personal-frontal interviews.

The study found that technique number one (self-affirmation and “foot in the door”) yielded better results in terms of changing attitudes toward the deniers and distancers groups.

In the more “extreme” groups – Defenders and Dismantlers there was no significant change before and after watching the videos.

Following the preliminary research, the campaign was conducted according to the following digital marketing strategy:

Focusing on the “distancers” and “deniers” groups with division into men and women while examining engagement data of the two video types (self-affirmation vs. social belonging).

We defined the target audiences in Google & Facebook advertising platforms (Google Ads & Facebook Ads Manager) according to the research groups demographic and behavioral data such as education, age, socio-economic level, religiosity, and tendency towards political ideology (right or left).

Advertising to the group of “dismantlers” (divided into men and women) in order to create a viral effect and buzz on the net, assuming that the percentage of responses and shares will be relatively high.

Advertising on Facebook (for women and men) and Instagram (for young people) in order to match the messaging and visual language to the platform.

In addition, the videos were promoted on YouTube to increase diversity and total exposure and to promote more meaningful learning of the subject by directing to a landing page with additional data.

A remarketing campaign directing to a landing page to deepen the learning and awareness of the topic in the various target groups.

Promoting dialogue on social networks – taking an active part in the dialogue by responding to comments on Facebook to increase user engagement and exposure. 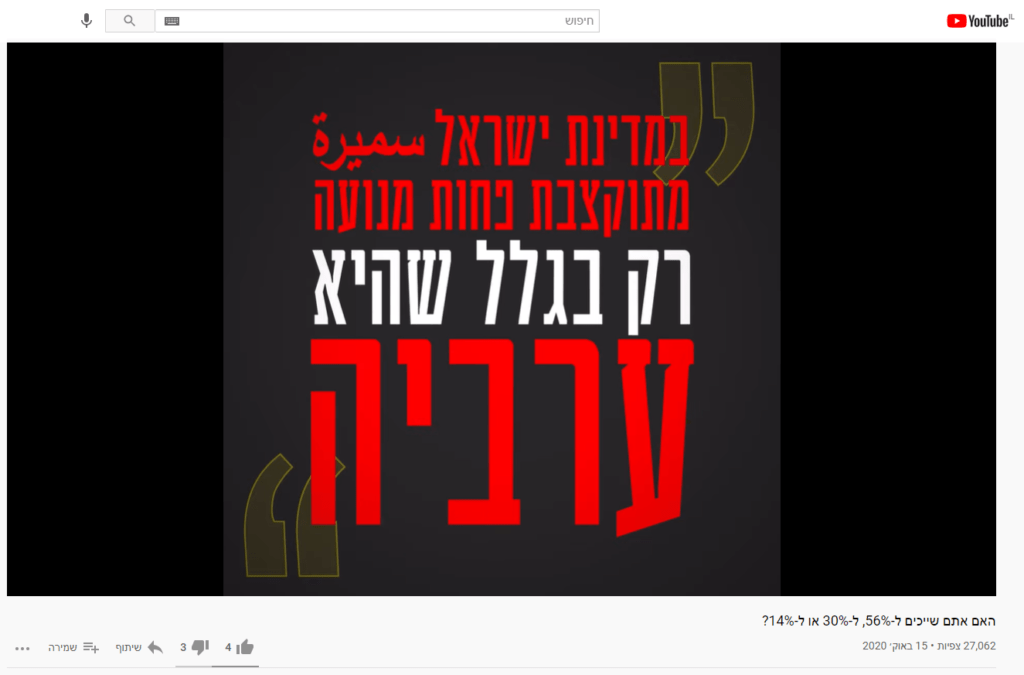 Significant exposure was created that contributed greatly to the Jewish public’s awareness of the issue of budgetary inequality and created various collaborations that led to actions on the ground.

Contrary to the hypothesis of the research and experiment in laboratory conditions, the video with the social belonging motif worked better in comparison to the self-affirmation technique.

A significant difference can be seen in the user’s engagement data of the 2 videos.

It is likely that the research hypothesis regarding the messaging technique was found to be incorrect since the study was done in face-to-face interviews, in a physical classroom, with the subjects devoting special time to participating in the experiment.

This contrasts with the average Facebook user who scrolls his feed quickly along with loads of other posts and content that compete for his attention.

I would like to thank you for managing the 2020 "Bney Hamakom" Campaign.
You have been a significant professional partner and managed to lead a complex and successful campaign on social networks.

The results were above expectations as the challenges we encountered during the campaign were completely unexpected.
You knew how to guide us to the right places and find professional alternatives and be a full partner in the thinking team.
I appreciate the availability of any question and explanation with patience and dedication.

There is no doubt that we will be happy to work with you in managing the following campaigns.

See our full expertise in